The Gambler by Fyodor Dostoyevsky 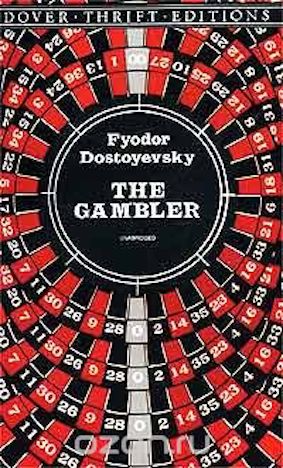 Howbeit, the Lord, wonderful novel! So many characters, so many destinies. Such magnitude in a small volume. Already the skill of the writer. Clearly your role here is played by autobiography. About anything the man can’t write so good, so sincere and as realistic as that he experienced. But make no mistake that the book is only about the player and his Payne roulette.

As always in Dostoevsky, even at two hundred pages unfolds a psychological drama that can accommodate if not all, exactly half of those vices that plagued the higher (not all) of the society. Thick and brazen spoilers for reading or gathering. General, ruining themselves and their children, waiting for inheritance to marry the woman as well is going to destroy his. Young girl left without maternal affection and wise Council, not fall in those who should. The old woman wishing to prove to everyone that she’s her own woman. And of course, the protagonist – a teacher, a player, the man, just a man in love.

Personally I am very sympathetic to the grandmother. Such a typical columnar noblewoman. I admire her determination and the arrogance that is likely a mask of despair the old man, knowing that his days were numbered, and around relatives awaiting her death in an indecent rush. Pity her terribly. Polina-Pelageya I’m not cute, though her actions, in General, is understandable. A young girl, rushing from one extreme to another. I think she is grown Nastya from “White nights”, flailing and unsure in yourselves, or in others. By the way, both left without a mother, which explains a lot in their behavior. General brand weak. To his account is the fairest phrase is “fool”. It’s a pity his children.

The protagonist – the Dreamer, moved from “White nights”, is actually not so major. He is romantic and impulsive, immediately makes decisions without thinking about the consequences. Sometimes they are successful, and sometimes can lead to death. If not physical, then spiritual for sure. Here Blanche is an interesting character. Despite his obviously selfish intentions, she is sympathetic as the reader and the characters themselves his sincerity. French does not deceive anyone, honestly telling about their life plans. But instead of repelling her suitors that honesty becomes one more reason to seriously fall in love with the heroine, adding to her charm and charisma. Among the other characters there are still a few outstanding personalities. But still, they are secondary.

Loved it. Unexpectedly for herself, read in one breath. And if the “White nights” I “inhibited” the punctuation and some figures of speech, “The Gambler” already obvious to Mature prose and a vivid example of the Russian classics, which are worth reading for the development of private speech.

The Hobbit or There and Back Again by J.R.R. Tolkien
Night Chills by Dean Koontz