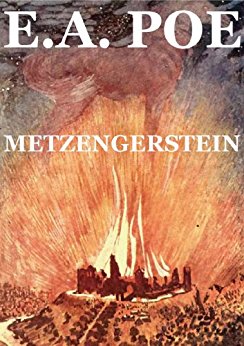 Two ancient kinds feuding since time immemorial, some do not remember. And here from two opposite sides remains one man who are forced to represent conflicting interests of their ancestors: on the one hand is the young Frederick, Baron of Metzengerstein.

It has not yet reached the age of majority and have done evil. A shameless revelry, and the like that often seen in this age, with its vast and incalculable wealth. On the other hand is an old William, Earl of Berlifitzing. He, for some strange reason (not to mention the eternal feud between their ancestors, of course), had an inveterate dislike to the family of his rival.

One evening the spirits of the ancestors Berlifitzing embodied in a horse in the tapestry that hung in the hall, where was the young Baron. The only explanation for further events one thing — revenge. If they wanted to kill Baron only for his misdeeds, it is unlikely he was a very young, stupid and rich, for some reason, haves no doubt that in the future he could grow up, realize their mistakes, to change.

Therefore, the justification for killing the only heir of the house of Metzengerstein is just revenge. Who’s worse? The book is boring. Vague, illogical. The end of the story first. But then you remember the tapestry, re-read the first line of the story. All puzzles have their place. The answer is simple: the feud ended with the deaths of both genders, and the murderer punished for his crimes from the Ghost of his victim.

The style and atmosphere of history”, Metzengerstein” reminded “the fall of the house of usher”