The Tragical History of Doctor Faustus by Christopher Marlowe 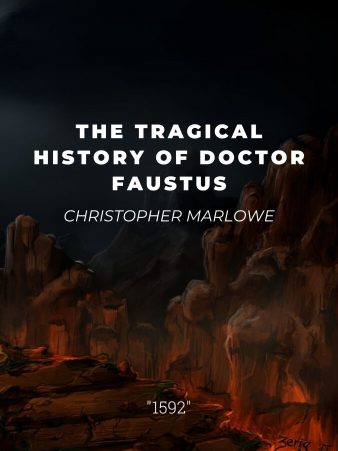 Few people know that to Goethe’s Faust was Marlowe, and they both relied on people’s legend. Work Marlo does not strike such scale and grandeur , as “Faust” by Goethe. Marlo is no frame – the dispute of God and of the devil. His Faust only a vain, proud man who defied the heavens. Hence the main theme – the praise of God’s mercy and warning against sin. To understand everything, Marlowe introduces a Chorus that explains what is happening.

Unfortunately, the original has not survived, to understand that it belonged to Marlowe, and what was added later for the sake of fun of the audience without comment rather difficult. Otherwise it is a mixture of tragedy and farcical elements. I generally have a suspicion that Marlo were only the beginning and the end. The Image Of Faust. A person with pride. He was not satisfied with received knowledge wants to be equal with the gods, for this first drawn to necromancy, and then in the next instance.

Though Faust and yelling before signing the contract that he wants the development of universities and cities, but dreams remain dreams. Faust uses the force for knowledge and “cheap tricks”: to give the Pope a slap in the face, to give the grapes a beautiful girl. From time to time he attempts to repent, but the devil is all this strictly suppressed. The Image Of Mephistopheles. Hell, suffer the loss of heavenly bliss. Small fry in hell. It is interesting that Mephistopheles cannot chant the Holy name and is running away from Faust, when he insists.

There was John Faust of Wittenberg, a man of great scientist. One day he decided that not lordly this business -theology to study hung in the direction of a diploma with a doctor’s title and zealously began to study necromancy and magic. And for some reason, decided to defy the heavens and become equal to God. Really people for mistakes, not learning. With the help of two swindlers he calls Mephistopheles and asks for unconditional service for 24 years. The most interesting that Mephistopheles alludes indirectly : “maybe not necessary….”. But the arrogant Faust, willing all worldly goods signed a contract with blood, not paying attention to all the signs.

Damn Faust from time to time suffers a split personality, then come to him the angel of good and an angel of evil, each trying to win a soul to his side. Dreams are Faust, Mephistopheles works his personal Wikipedia. Everything is just fine until the character asks a question about the creation of the world. The devil cannot chant the Holy name and ran to complain to the Pope. The devil comes not alone, but with company. I liked his definition: Prince of darkness and some random guy who runs past. In order to teach it to turn to God, and at the same time to have the bird not flew away from the cage, the devil arranges a parade of sins. Brilliant and witty description, by the way.

Meanwhile, Marlo has successfully entertains the audience with the antics of Faust, his pretended miracles, and servants, desired gratuitous wealth. Interestingly, from time to time, Fausta is asked to repent. For example, the scene with the old man. Finally it comes to a head: Faust in confusion , he left to live just an hour, he doesn’t know whether to pray, whether to accept. Live it anyway you want. Repentance does not occur, the devil takes his prey.

Siddhartha by Hermann Hesse
Until You by Denise Grover Swank